As Marshall McLuhan Would Say - The Medium Is The Message - Or, Anyone Who Hasn't Used A Manual Film Camera Has Really Missed Out

With less than two weeks left, I thought I would write a little about the Vancouver 12 x 12 Photo Marathon, the camera I will be using, and my thoughts on film cameras in general.  Let me explain the title of this post a little more.  Digital cameras are great.  I have shot many beautiful images over the past few years on my digital Canons, and I enjoy using them.  I have a collection of seven lenses for my two bodies, ranging from pro-grade glass to consumer-grade plastic lenses.  In addition to that, I have a duffel bag full of off camera flash gear.  They all perform well and have never let me down.  But they seem to lack a certain character that the old manual and mechanical film cameras have.  If you pick up and shoot a picture with a digital camera, you press the shutter button, it clicks, and you see the preview image on the lcd screen.  They all do that, and all feel similar in their "click" to a certain degree - it seems a little impersonal.  However, if you pick up a mechanical film camera, it is an altogether different thing.  It is an experience.

Each kind of manual or mechanical film camera had a different feeling - and I'm talking about the manual focus cameras here, not the autofocus ones.   Depending on the camera, the film wind lever could be a smooth throw, or a rough one, and occasionally it could require two throws to advance the film.  The viewfinders were all big and bright.  And firing the shutter could be a loud thunk - like a Nikon F3 or a Konica T series - or a nice quiet click - like an Olympus OM-1.  Like MY Olympus OM-1.  Like my Olympus OM-1 that I will be using in the Vancouver 12 x 12 Photo Marathon.  And don't call it an analog camera - that term came from digital photographers who don't know any better.  We never called them analog - we called them film cameras.  The term "analog" somehow removes the character from these old gems. 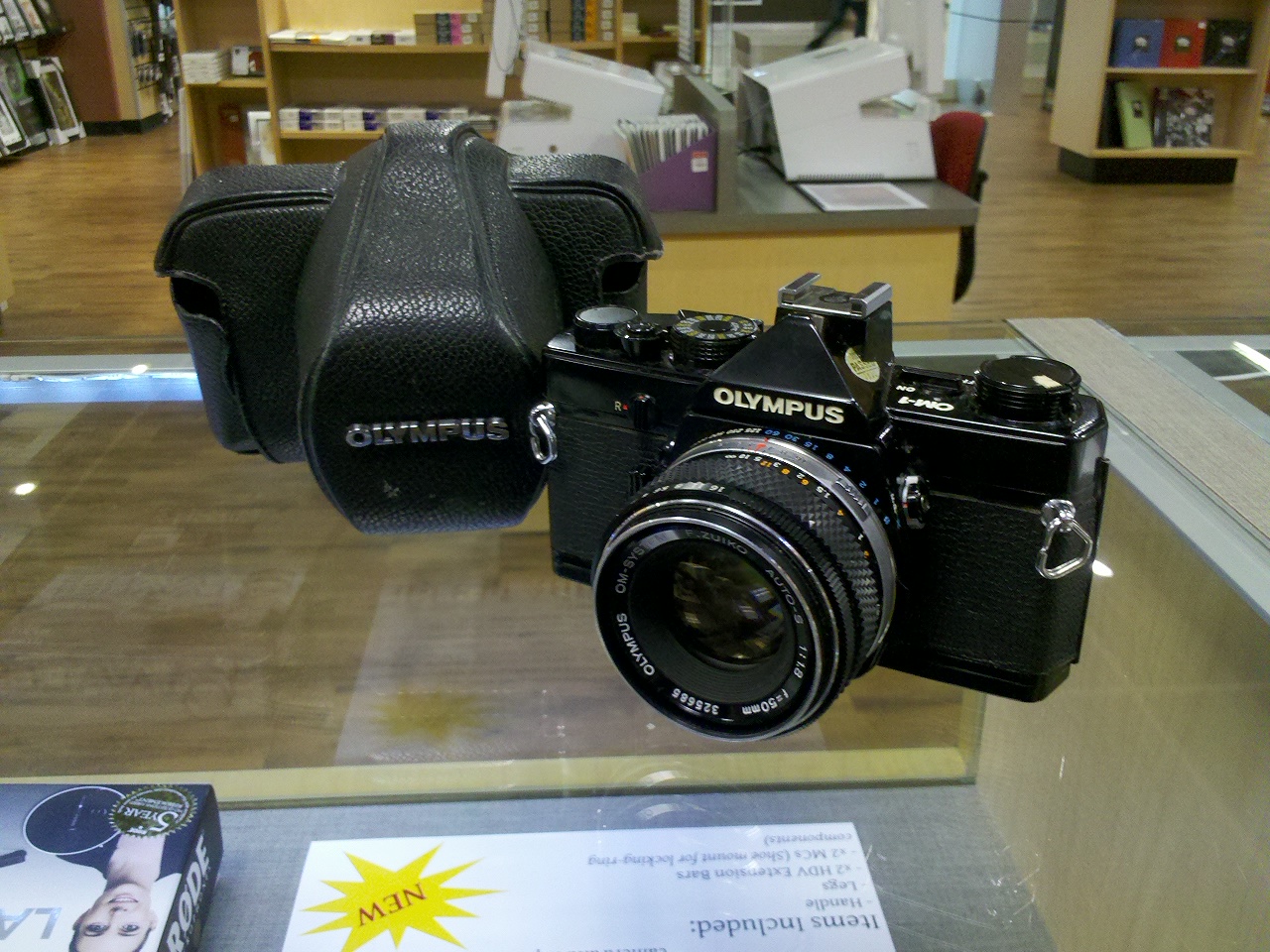 This camera came to me just by chance.  When I was working for Lens and Shutter, a customer came in one night and asked if we could help him dispose of his old camera.  He wasn't using it anymore, and it was just taking up space and worth probably nothing.  I said yes, he could bring it by and we could recycle it for him.  He said he would be back the following evening.  When he came back, he dropped off his camera, a couple lenses, and thanked us for helping him out.  When he left, I had a closer look.  The camera's never-ready case said "OLYMPUS", so it caught my interest.  Imagine my surprise when I opened the case and found an Olympus OM-1 in good working condition, with a 50mm 1.8 lens on it, as well as a 135mm 3.5 telephoto.  Really?  Was he kidding?  He just dropped off a classic!  I examined it more thoroughly, and it had a dirty viewfinder and a dead battery - that was it.  The shutter clicked beautifully with no "recoil" (Nikon F and Konica users will know what I mean).  The mechanics were fine, and the lenses were spotless.  I had just found my next 12 x 12 camera!

Now, this was an interesting camera.  It was released in 1972, so it is just as old as I am.  It has some scars and scratches, just like me.  And it still works.  Back in those days, cameras were built to last a long time.  And it will probably still be working long after my digital cameras.  It was completely mechanical with a battery just to power the light meter.  It is small, light, but feels tough.  It has great ergonomics and beautiful lenses.  The shutter is a simple click (which is quite something for an SLR).

This is probably part of the reason why the Vancouver 12 x 12 Photo Marathon is popular.  It makes photographers pick up their old cameras that they enjoyed USING.  The complete experience of using an old Leica, or a Canon Ftb, or a Nikon FM, or an OM-1 is just fun.  It's a kind of fun that digital cameras just don't give you.  As hard as you try, shooting a Nikon D3200 doesn't even compare to using a Nikon F3.  A Canon 5Dmk3 is a cool camera, but not as cool as a shiny Canon Ftb with chrome highlights.  The Olympus E-M5 is styled after the OM-1, but that's as far as the comparison goes.  A digital "click" just can't match a mechanical "kerthunk".

I still shoot with film.  I have a Mamiya RB67 medium format camera that I love using, and the negatives are huge and really sharp.  I still have my old Canon EOS film cameras.  They served me well, and gave me great images.  The Elan 7 I used in last year's 12 x 12, and it worked well.  I will probably use them again sometime.  But in the meantime, I look forward to using this old, great Olympus at the Photo Marathon.  I'll let you know how it goes.
Posted by Jason Hamper at 23:17